10 Best Theme Parks around the World

Ferrari World, Universal Studios, Disney World, Warner Studios or the adventure parks of the Riviera Maya offer adrenaline and shows in equal parts. Vertiginous roller coasters, impossible loopings, simulators of great realism… We take a tour around Europe, Asia and America in search of the incredible attractions of the best theme parks in the world. Do you want to discover them?

Ferrari World: Those who want to experience the thrill of cars without being professional drivers, can do so at the Ferrari World in Abu Dhabi. The ‘rampant horse’ team opened its first theme park in the United Arab Emirates in which, in addition to the attractions that challenge vertigo, there are simulators in which you can drive a single-seater competition to get the sensations of a race track. 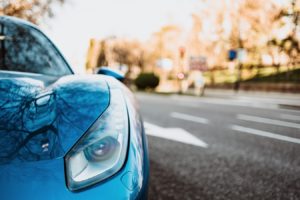 Universal Studios: Universal Studios’ films -‘Shrek’, ‘The Minions’, ‘Transformers’ or ‘Jurassic Park’, among others – have left for posterity spectacular scenes of action and fun. Can you imagine living these adventures? You don’t even have to dream about it, because in the attractions of the Universal Studios parks it is possible to make it a reality. In the other part of the world, in Asia, it is also possible to visit the Universal Studios in Singapore. It is organized into thematic areas and, among its experiences, allows us to walk among the dinosaurs of ‘Jurassic Park’ or walk the castle of ‘Very Far Away’ that appears in the films of the green ogre Shrek. 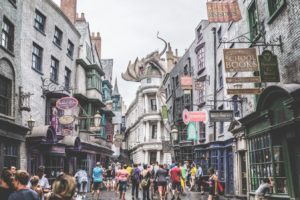 Disney World: Characters such as Mickey and Minnie are already part of the universal popular imaginary. The most famous fiction factory in the world presents in Disney theme parks the legacy of the company’s most endearing films. The first park of this dream factory was the Walt Disney World Resort in Orlando. Riding on its attractions means traveling to a fantasy world, where you can emulate Aladdin and his magic carpet, live the adventures of Peter Pan or feel the power of force in the simulators of ‘Star Wars’ located in Disney’s Hollywood Studios, also included in the same Disney complex in Orlando. 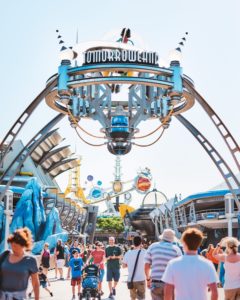 Warner Studios: The magic of Harry Potter will be present in the most entertaining tour of the studios where the eight films in the series were created. Departing from London, all fans of the famous magician will enjoy visiting the authentic Great Dining Room, exploring Dumbledore’s office, enjoying objects such as the Nimbus 2000 broom and Hagrid’s flying motorbike, and reliving places such as Gryffindor’s common room, the boys’ bedroom, Quidditch and Ollivander’s shops or the Gringotts Bank of Magicians.